Alas! regardless of their doom, 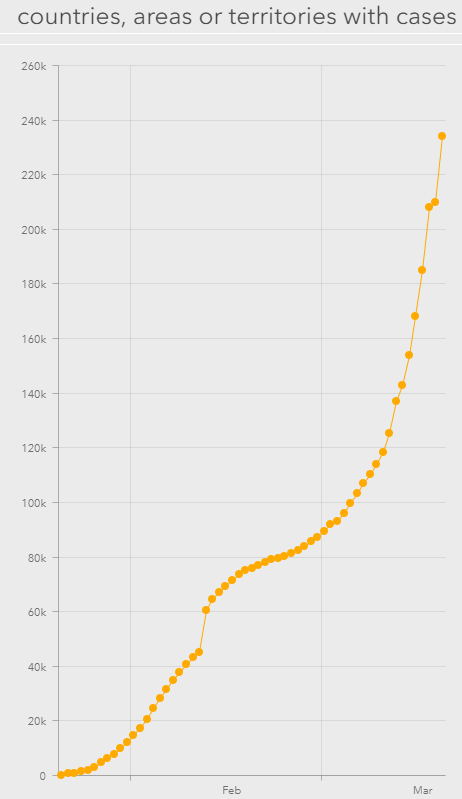 The little victims play;
No sense have they of ills to come,
Nor care beyond to-day.


That is part of a poem by Thomas Gray, and I’m thinking about it now as I sit in my home office, indefinitely isolated from my family. Like nearly everyone around the world, my life and my business have been derailed by the Coronavirus. (WordPress, with the precious simplicity of AI, suggests that I might have meant to write “coronations” as the final word in that sentence).

I started seriously tracking the crisis on January 27th. By that time it was already difficult to get masks, though we were able to get lots of hand sanitizer before the rest of the world caught on. By February 10th, I had learned that masks aren’t helpful for walking around in public (unless you already have symptoms). I brought one with me anyway to my gig at Texas A&M, in case I was stuck sitting next to someone with a cough. It seemed like there was a chance that the disease could be contained, until the Diamond Princess debacle. Then I realized there was nothing stopping the exponential growth of this disease, worldwide. The Chinese, with utterly draconian measures, have only slowed it down. If they return to normal life it will explode again.

It’s particularly hard to be a professional critical thinker at a time like this. My job is all about seeing the truth about trouble, and there’s altogether too much of that truth coming at us. I spend a lot of time reading research on Covid-19 and epidemiology, then explaining to my family how terrible this will get. My son and I are competing for who will be first to uncover the most depressing facts.

Yet see how all around ’em wait
The ministers of human fate
And black Misfortune’s baleful train!
Ah, show them where in ambush stand,
To seize their prey, the murderous band!
Ah, tell them they are men!

On my most recent trip, I canceled all dinner engagements (after reading a case study of a Hong Kong family who got infected over the course of a single meal together) and wore gloves all day while teaching. No one else was canceling dinners or wearing gloves.

I canceled my European training, too. Five days later, restrictions were imposed that would have forced them to be canceled, anyway. But at the time, my hosts were a bit annoyed with me.

I came home and isolated myself from my wife and mostly from the dog (dogs can become infected, too). Lenore is in lockdown. So is my son and his wife. I’m the only one who interacts with the public– doing all the shopping– and every time I do, I assume that I may have caught the virus. I change my clothes and take a shower when I get home. I live in my office. Lenore and I talk via Skype or else I stand on the stairs. She leaves food on the landing. No more movie nights on the couch with the family.

Do you think I’m overreacting? Wait two weeks before you say yes.

In 1994 Intel shipped a bug with their Pentium chip. It would sometimes get the wrong answer when dividing numbers. It ultimately cost them $450 million. Before that happened, if a tester were to have said “Look at this bug, it might cost us millions!” he would have been told “where did you come up with that number? You are just overreacting.” After it happened, they invested millions in better testing. Intel was one of the first places I taught my testing class, in ’96.

Almost exactly ten years ago I was stuck in Europe for ten days because of a volcano in Iceland. Literally everyone flying in Europe had to cancel their flights and rebook (twice!). Before that happened, if a tester were to say “Let’s test what would happen if a million people suddenly rebook their flights” he would be ignored. I suspect testers got a temporary bump in influence, after that.

As I am writing this post, our first Covid-19 case on Orcas Island has been reported. Still, only 21 test results have come back, out of only 50 performed. Our county population is about 15,000 permanent residents. That’s poor test coverage. If we had comprehensive testing, and if all the people who tested positive were quarantined, my family would not need to lock down as hard as we have. Testing allows you to know the truth. Knowing the truth allows you to manage risk efficiently. No one can manage risk efficiently on Orcas Island, today, nor in most places around the world.

Testing lights the way, but we are blind. That leaves us with generalized fear. No wonder the stock markets are crashing!

Bugs in Your Product

Many companies spend little money or effort on testing. The people who push DevOps think they can automate all of it—they can’t and don’t. The people who push Agile says it’s everyone’s responsibility—which usually means no one takes responsibility to test well, to learn how to test well, to be ready to test well, and to coordinate testing well with everything else going on. When I challenge people on this, an answer I often get is “our way works… and we know that because we are still in business.”

As they discovered in Italy, and as we are all seeing right now, you can be “in business” just fine this week, be paralyzed next week, and be in deep mourning the week after that. Yes, you might be okay if your testing is bad, but you can’t know the quality of your testing just by how you have not yet suffered a terrible disaster.

I like the idea of automated output checks, and I like the idea of everyone helping to test. But beyond that, to be safe and responsible in our engineering, we need people who take testing responsibility seriously, and are given the time and resources to do it well.

Yet, ah! Why should they know their fate,
Since sorrow never comes too late,
And happiness too swiftly flies?
Thought would destroy their Paradise.
No more;—where ignorance is bliss,
‘Tis folly to be wise.

Thomas Gray was musing about innocence as he watched school boys playing in a yard. He was thinking, “Don’t break the spell. Let them be blissfully happy kids.” We, however, are not children. We should not wait until we are sure there is trouble. We must have faith in trouble; assume there is trouble until we can prove there isn’t. This helps us in our projects, in our testing, and it helps keep our families safe.